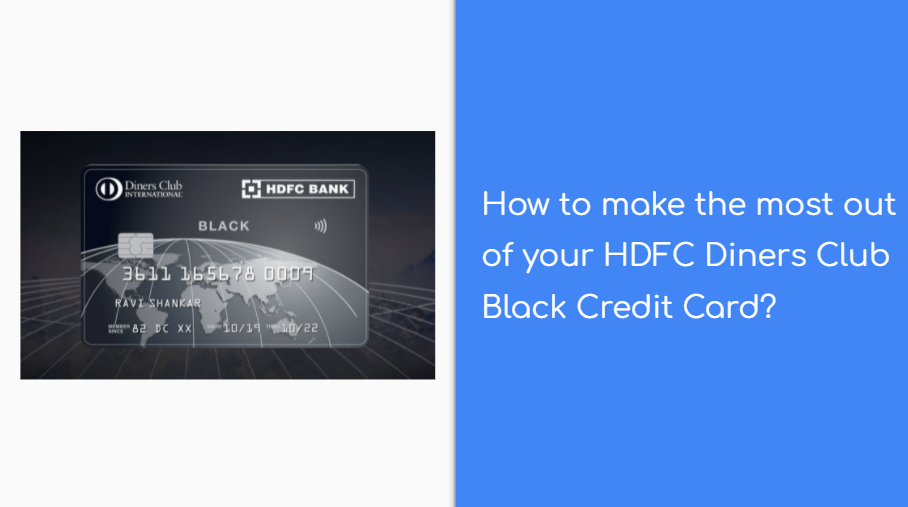 As it is a premium credit card, it comes with quite a high membership fee of Rs. 10,000 per annum and offers a plethora of add-on benefits like complimentary subscription of services like Amazon Prime, Zee5, Zomato Gold, and others and gift vouchers from popular brands like Ola, BookMyShow, TATA CLiQ and cure.fit on achieving the stipulated spend milestones. You also get complimentary lounge access at domestic airports across India.

Before we analyze how you can use your HDFC Diners Club Black Credit Card so as to avail of the maximum benefit, it is a good idea to have a look at some of the offers that HDFC bank is offering for their Diners Club Black card members.

With this offer, you get complimentary membership of the Club Marriott hotel loyalty program and complimentary subscriptions of services including Amazon Prime, Zomato Gold, Forbes, MMT Black and Times Prime on a minimum annual expenditure of Rs. 8 lakh with your HDFC Diners Club Black Credit Card.

You can choose any gift vouchers from any two of the following brands- Ola Select, BookMyShow, and TATA CLiQ, a cure.fit Live (worth Rs. 500 each) on minimum monthly spends of Rs. 80,000 with your Diners Club Black Credit Card.

For more details on reward rate and maximum Reward Points that can be earned for spends via SmartBuy, you may refer to this post.

Now as far as other add-on benefits are concerned, as mentioned earlier, you get complimentary membership of loyalty programs and services like Club Marriott, Amazon Prime, Zomato Gold, etc. on an annual expenditure of Rs. 8 lacs with your Diners Club Black Credit Card. Also, if you spend a minimum of Rs. 80,000 in a month, you are entitled to complimentary gift vouchers from partner brands (see the Key Features section above).

Now let’s say you spend Rs. 9,60,000 in a year, such that the expenditure is equally distributed throughout the year- Rs. 80,000 each month, out of which Rs. 56,250 is spent on shopping at Amazon via SmartBuy, you earn the Reward Points as per the following table-

Thus, on spending Rs. 80,000 in a year, you earn a total of 10,160 Reward Points with a net reward rate of 12.7%. On top of this benefit, you also get other privileges like gift vouchers from partner brands like Ola, BookMyShow, TATA CLiQ, etc. and complimentary membership of loyalty programs and subscription services like club Marriott, Amazon Prime, Zomato Gold, etc. The annual fee of Rs. 10,000 is also waived off in this case as annual expenditure exceeds Rs. 5 lakh.

The Reward Points earned on HDFC Diners Club Black Credit Card can be redeemed against flight bookings, hotel reservations, partner airlines’ AirMiles, purchasing products and vouchers from the given catalog and cashback (adjustment against the card’s statement balance). The redemption rate (i.e. the monetary value of Reward Points) is different for redemption against different spends categories.