While many other card issuers including American Express, IndusInd Bank, SBI Card were already offering their super-premium credit cards in a metallic form factor, rumors had been doing rounds that HDFC Bank would also soon be launching a metal edition of its most premium Infinia Credit Card. Now, finally, the bank has officially launched the Infinia Credit Card in Metallic form factor- the Infinia Metal Edition Credit Card. While the reward rate and most other benefits are the same for both the metal and the PVC variants of the card, the metal card does come with some extra exclusive privileges. The existing PVC cards have also been upgraded so that the new features are also applicable to the existing PVC credit cards. All new issuances of the Infinia Credit Card shall be on the metal variant (i.e. the PVC Infinia Credit Card is being discontinued.)

While the reward rate of both the metal and the PVC credit cards remains the same- 3.3% (5 Reward Points per Rs. 150 spent), you do get some extra benefits with the metal variant (although, all the new features of the metal variant are now also applicable on the PVC variant) including-

How to redeem Reward Points for Apple/Tanishq vouchers?

You can pay a maximum of 70% of the voucher amount with Reward Points, rest amount will have to be paid using your Infinia / Infinia Metal Edition Credit Card.

Membership Fee and Spend Based Reversal:

How to upgrade to Infinia Metal Edition Credit Card 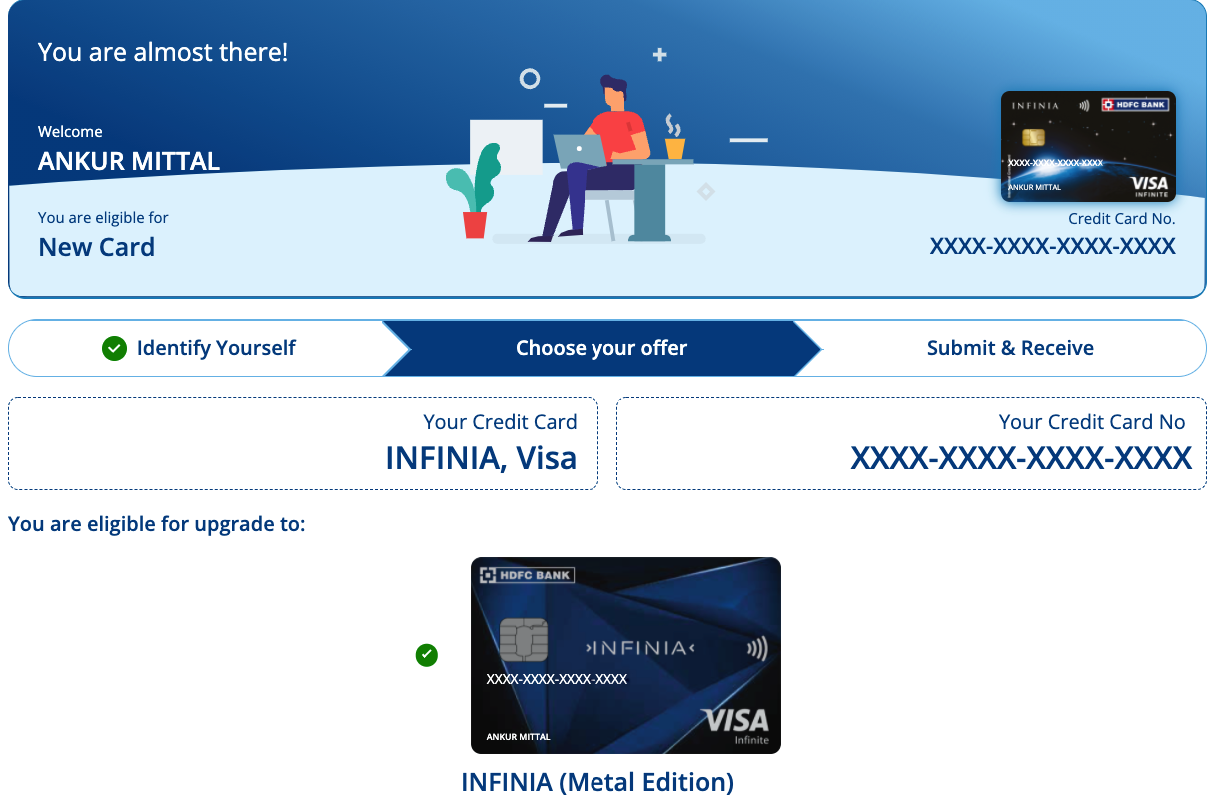 HDFC is giving an option to existing Infinia PVC cardholders to upgrade to the Infinia Metal Edition Credit Card. The upgrade option is being rolled out in a phased-out manner, so, not all Infinia cardholders are eligible for the upgrade as of now. If you are an existing Infinia cardholder, you may check your eligibility for the upgrade on this page by entering your registered mobile number and the last 4 digits of your current Infinia Credit Card.

HDFC Bank Infinia Credit Card is the most popular credit card in the super-premium category as it offers a high reward rate of 3.3% (up to 33% via Smartbuy) and adding the metal form factor to it would also give it a premium in-hand feel. The Bank would be upgrading all the features of the current Infinia Credit Card to match with those of the Metal Edition (the membership fee of the PVC cardholders will continue to remain Rs. 10,000). As far as travel benefits are concerned, Infinia Cardholders were already provided complimentary Club Marriott Membership, but now, a new benefit of 1 complimentary night stay with every 2 nights booked at ITC Hotels has also been introduced, that makes the card even more rewarding for frequent travelers.