Citibank’s first woman CEO Jane Fraser earlier this year announced that the bank would be exiting the retail banking market in 13 countries across Asia and Europe including India while continuing to focus on its institutional business and wealth management services. The bank assured its Indian customers that it would not be abruptly shutting down its business in the country and continue to serve the customers with the same care while looking for a potential buyer. 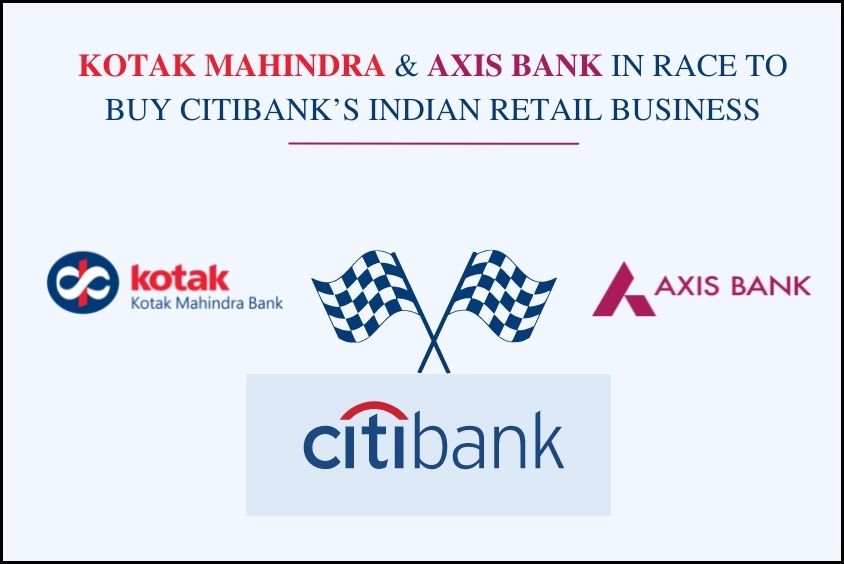 Another option could be that any of the existing retail banking players in the country take over Citi’s retail banking businesses in all verticals. Kotak Mahindra Bank, IndusInd Bank, Axis Bank, HDFC Bank, ICICI Bank and Singapore-based DBS Bank emerged as top contenders for acquiring Citibank’s consumer business in the country.

As per a report by the Economic Times, while Kotak Mahindra Bank, Axis Bank and IndusInd Bank had submitted binding bids for the deal by October, ICICI and HDFC eventually pulled back after evaluating the prospects of the deal.

As per recent revelations by people close to the matter, Kotak Mahindra Bank and Axis Bank have emerged as two of the top contenders for the acquisition. IndusInd Bank has already hinted that it is out of the acquisition race. If this Economic Times report is to be believed, although Axis Bank has a larger retail book and a larger credit card customer base, Kotak’s bid might have gone further than that of Axis Bank.

Citibank’s retail banking assets in the country are valued at less than $ 2 billion. Citibank is the 6th largest credit card issuer in India while accounting for 4% of the total credit card spends in the country (down from 20% a decade ago). With 2.5 million retail customers and 1.5 million bank accounts, Citibank’s overall market share in the retail banking sector in India in terms of advances and deposits is 0.6% and 1.1% respectively while the bank’s India subsidiary’s contribution is 1.5% of the bank’s profit globally.

While Citibank might not seem to be that big a player in the Indian retail banking sector which includes all the savings/current/fixed deposit accounts and credit card accounts, the large proportion of premium and corporate accounts makes Citibank India takeover an attractive deal for the bidders. While the deal is yet to be finalized, if reports are to be believed, Kotak Mahindra Bank seems to be leading the game followed by Axis Bank.