Rumours have been doing rounds for long that HDFC Bank might launch a new ultra-premium credit card above the Infinia Credit Card. But because of COVID and then the RBI ban, HDFC hasn’t been able to launch new products (including credit cards) in the market. We have also seen the screenshots of HDFC Credit Cards Terms & Conditions file naming Galaxia Credit Card which later turned out to be fake. Now another evidence suggesting that the bank might be launching an ultra-premium credit card by the name Infinia Reserve Credit Card– probably a more premium variant of the Infinia Metal Edition Credit Card.-  has surfaced.

What we know about HDFC Infinia Reserve Credit Card

HDFC Bank had registered the trademark for Infinia Reserve back in 2019, which clearly shows that the bank intends to use the term “Infinia Reserve” (check out this PDF on the official IP India website) 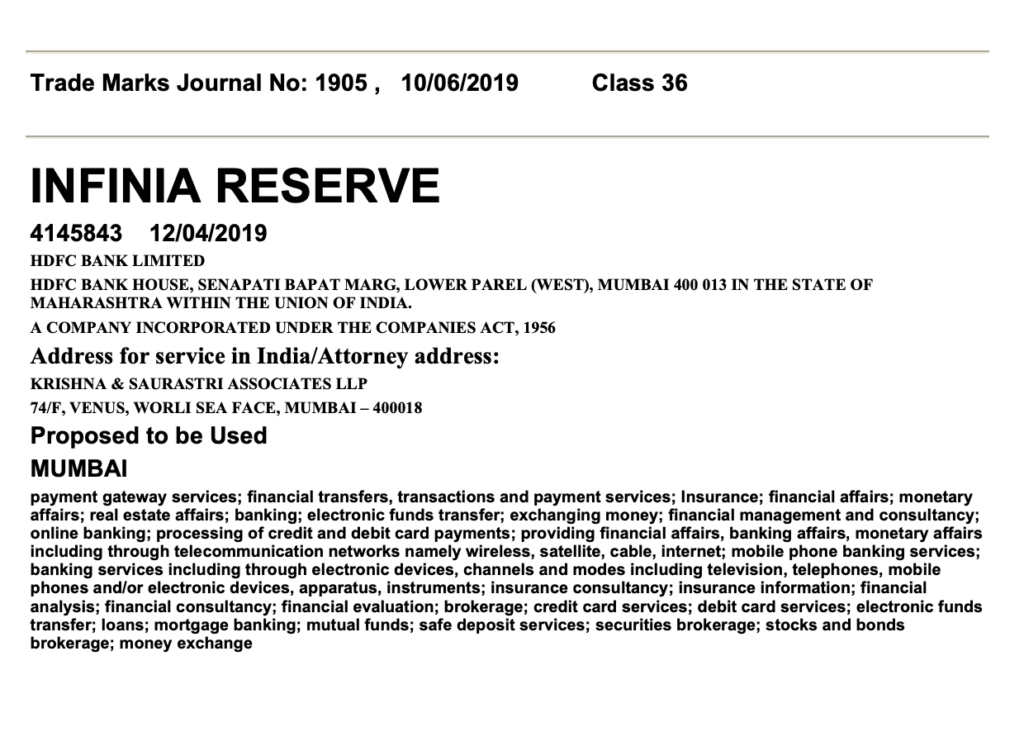 After the trademark was registered, there was no news on Infinia Reserve until recently when HDFC started updating their Smartbuy portal. Recently, the bank added a new code on the Smartbuy Beta website (a website used by the bank for testing purposes).

Apart from the Infinia Reserve Card, many other credit cards are also due for launch by HDFC Bank. We can expect these launches once the RBI ban is completely lifted and the bank is allowed to launch new digital products.

Once the RBI ban is lifted, the bank is expected to launch new credit cards starting with the Paytm co-branded cards followed by the Infinia Reserve and Emirates credit cards. Keep checking this space as we will update this post as soon as any new info is available regarding HDFC Credit Cards launches.