As most credit cards issuers are providing many credit card offers on the occasion of Independence Day, American Express has also announced an offer for its credit card holders where they can earn additional E-voucher from various partner brands based on their spends apart from the regular accelerated reward points during the offer period on the AmEx Rewards Multiplier portal. The offer will start on 11th August and will last till 15 of August and the cardholder can earn the regular reward points along with the voucher within this period. Therefore, if you were planning to make purchases during this period, then you should use Reward Multiplier to earn an e-voucher worth up to Rs. 10,000. To know more about the offer, refer to the details given below.

During the offer period (11th August to 15th August), Amex Cardholders can earn an E-Voucher from various partner brands present in Dining, Fashion, beauty, and also for marketplaces including, Myntra, Flipkart, and Tata Cliq in addition to the regular Bonus Membership Reward Points for transactions made with American Express credit cards on the Rewards Multiplier Portal. The E-Voucher will only be provided to the cardholder upon achieving the spend target as discussed below.

The spends made in brands or categories present on the Reward multiplier will be considered for the calculation of the spend target and no transaction made outside the portal will be included in the same. Currently, the AmEx cardholders were earning up to 10X Bonus Membership Reward Points for transactions made on Reward Multiplier portal, but now in addition to that they can also get a E-voucher worth up to Rs. 10,000, which has been discussed in detail below:

During this offer, the cardholders can get the opportunity to earn an E-voucher from various partner brands in addition to the reward points for spends made at the Reward Multiplier portal with their American Express Credit cards as explained below: 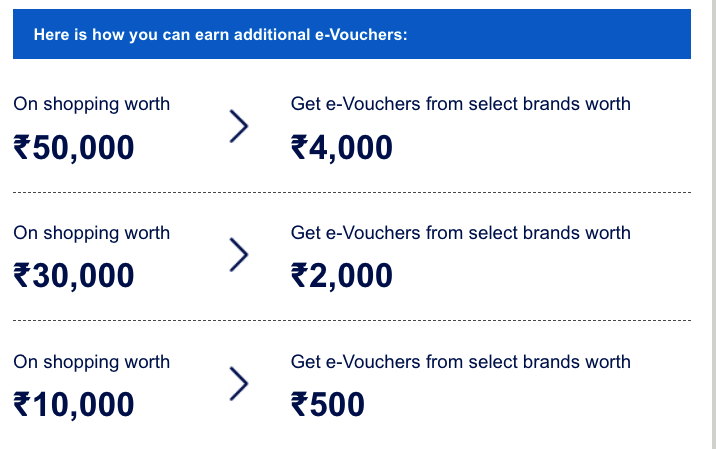 Following are the E-voucher options from Partner Brands and Marketplace for the AmEx Cardholder after achieving the spend target:

The Independence offer announced by American Express is subject to terms and conditions (over and above the regular T&C of Reward Multiplier) as mentioned below:

As many banks have announced various offers on credit cards, American Express has also done the same by providing its cardholders with amazing offers on the Reward Multiplier Portal. As we get to see multiple offers from American Express every now and then, this time AmEx is offering an E-voucher worth up to Rs. 10,000 from various partner brands. Apart from earning up to 10X Bonus Reward points for purchases made at the portal, the cardholders have the opportunity to earn a voucher with those spends. Therefore, it’s an amazing offer for the Amex cardholders to achieve more on their transactions.

In case you have any doubt related to the offer by AmEx, feel free to ask in the comment section below.